During the weeks of Advent I thought it might be fun to check out some Catholic artists who were well known in their day and perhaps not so much today, but who knew the spirit of Advent - of expectation.

The first is a favorite of Mother Dilecta, having discovered him through "Magnificat" magazine. At  the age of 15 MAURICE DENIS wrote in his journal: “I have to be a Christian painter and celebrate all the miracles of Christianity, I feel that it has to be so.”

In 1890 he declared that painting is “basically a flat surface covered with colors disposed in a certain order,” a credo taken up by later Modernists. Maurice would later adopt a more “classical” style after a sojourn in , always believing art should “express the mysteries of the Faith clearly in the play of forms and colors.”

A devout Roman Catholic, he was single-minded in his effort to renew French church art, which had degenerated in the 19th century into what was dismissively called the “Saint-Sulpice style,” after the Paris quarter, specializing in kitsch plaster saints and devotional items.

Together with Painter Georges Desvallieres, he founded Ateliers d’Art Sacre in 1919 to teach young artists to create works “that serve God, the teachings of the truth and the decoration of places of worship.” Maurice himself, made canvas paintings and wall murals for over 15 churches across . 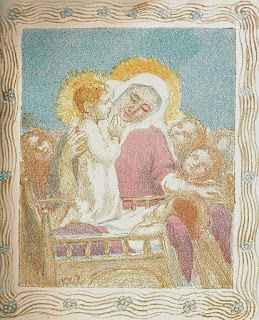 A devoted husband and father, the artist often used his beloved first wife, Marthe, and their six children as models, placing sacred figures in settings from his daily life in Saint-Germain-en-Laye, the Breton seacoast, where the family spent their summers, or an Italian villa they had visited in , near . Maurice was especially drawn to maternal images of the Virgin Mary, making paintings and prints of the Annunciation and the Madonna and Child in multiple variations. 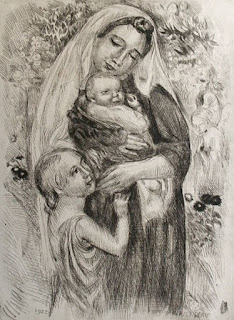 French Dominican Friar Marie-Alain Couturier, a onetime Ateliers student and leading proponent of Modernist sacred art, said that Maurice  was the painter of “the sweet presence of God in our life.”


Posted by mother hildegard at 4:22 PM