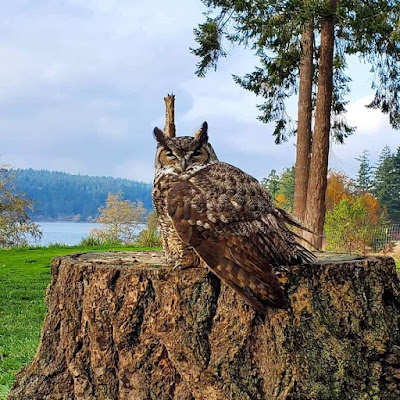 No this is not a photo from a calendar  but shot last week on Shaw Island, in front of Blind Bay by our ex intern Marijke, just days before she went home to the Netherlands.

This past weekend was the Christmas Bird Count and the good news is we had many ducks  and more passerines then in past few years.  I am not sure this GREAT HORNED OWL will make the list, but he is an awesome sight, especially for all who saw him.

Great Horned Owls vary in color tone across their range: birds from the tend to be dark sooty while those across the Southwest are paler and grayer. While Great Horned Owls are nocturnal this fellow did not seem to mind being caught in the open. You may see them at dusk sitting on fence posts or tree limbs at the edges of open areas, or flying across roads or fields with stiff, deep beats of their rounded wings.

This huge owl is found  throughout North America and much of .. Aggressive and powerful in its hunting (sometimes known by nicknames such as "tiger owl"), it takes prey as varied as rabbits, hawks, snakes, and even skunks, and will even attack porcupines, often with fatal results for both prey and predator. Great Horned Owls begin nesting very early in the north, and their deep hoots may be heard rolling across the forest on mid-winter nights.

Great Horned Owls have a large repertoire of sounds, ranging from deep booming hoots to shrill shrieks. The male's resonant territorial call "hoo-hoo hoooooo hoo-hoo" can be heard over a mile during a still night. Both sexes hoot, but males have a lower-pitched voice than females. Most calling occurs from dusk to about midnight and then again just before dawn.

Be it Advent or summer this rarely seen owl is a welcome visitor to our small island!


Posted by mother hildegard at 3:21 PM