AN ARTIST WITH SOUL


ERNST BARLACH  was a German Expressionist sculptor, printmaker, and writer. Early in his career, he trained under French artists and produced Art Nouveau-styled sculpture and works on paper, but was initially unable to find success. This led to a formative trip to Russia where the artist began creating figurative sculptures inspired by early Gothic art, carving spiritual and emotional themes from hard woods and bronze casts.

Achieving widespread critical acclaim in his native before the First World War, Ernst , once a supporter of German militarization, enlisted as an infantry solder. He served until 1916, when the harsh realities of war quickly transformed his perspective. 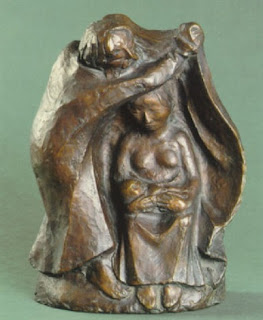 Thereafter, Barlach was compelled to produce art in staunch opposition to war and the subsequent rise of Nazi power. His allegorical and pacifist art earned him the label of degenerate, and his work fell out of favor. Born on January 2, 1870, he died in , Mecklenburg in on October 24, 1938.

I emulated his work when I studied sculpture in Koln, Germany, especially his pieces in wood.

Posted by mother hildegard at 4:20 AM