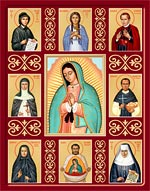 The Catholic Church has existed in the United States since the country's earliest history. Columbus' expedition of 1492 included Catholic priests among the crew. Catholic missionaries were some of the first explorers in British and French colonial lands in the east, and Spanish lands in the west. Maryland was founded as a Catholic colony.

The first three American saints were canonized in 1930, and since then, nine other Catholics in the U.S. have been recognized as saints. Roughly 100 Americans are being investigated for sainthood today.

SAINTS  we have written about already are: (dates are canonization year)


VENERABLES: (written about or soon to be = dark )


OTHERS: (does not include about 70 more)

Posted by mother hildegard at 9:25 AM