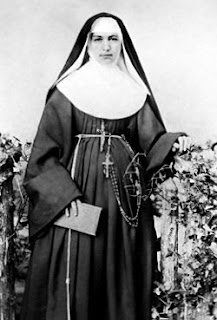 St. Marianne  Cope was born in Germany in 1838 but immigrated with her family to Utica, New York when she was two years old.  She joined the Sisters of St. Francis of Syracuse in 1862. She was involved in the opening of the first two Catholic hospitals in Central New York. At the time, their Charter was stipulated so that medical care was to be provided to all, regardless of race or creed. She became hospital a administrator and then superior of her convent.  These experiences helped prepare her for the special ministry that lay ahead of her.

A letter dated May 28, 1883 was the letter that would change her life.  It was a letter written by a missionary in the Sandwich Islands, requesting that the Sisters take charge of the hospitals there.  Although more than 50 religious congregations had already declined, Mother Marianne wrote to Father Leonor: “I am hungry for the work and I wish with all my heart to be one of the chosen Ones, whose privilege it will be to sacrifice themselves for the salvation of the souls of the  poor Islanders.I am not afraid of any disease, hence it would be my greatest delight even to minister to the abandoned lepers.”


Mother Marianne and six sisters boarded an express train and, after six days and five nights in a railroad coach, they arrived in San Francisco. Five days later they boarded the steamship Mariposa for the 2,200-mile sea voyage to Hawaii.  Sea sickness kept Mother Marianne miserable in her bunk for the seven days of their voyage and afflicted her on every later trip from island to island.
The Sisters were horrified when they viewed the Branch Hospital in Kakaako, Oahu, where Hawaiians suspected of having leprosy were detained until a clear diagnosis could be made.  There were 200 patients in a facility built for 100 but the worst problems were the filth, swarms of flies, the stench of open, untreated sores. The Sisters were shocked to realize that patients were thrown together regardless of age, sex or stage of illness. Nonetheless, Mother pinned back her wide outer sleeves, rolled up the inner ones and got to work.

In 1887, a new government took charge in Hawaii and its officials decided to close the Oahu hospital and to reinforce the former alienation policy. Mother Marianne again responded to the plea for help coming from the new government.

Her response would take her into a lifetime of exile together with those she served. By accepting the challenge she knew she would never be able to return home to see her beloved family and friends but once again she followed the path of sacrifice.

Life at Kalaupapa was not easy.  Life was a real challenge and day by day the drudgery, the sameness, the fear of the disease and the sadness of death preyed upon the Sisters’ nerves. The Sisters worried about contracting leprosy, however, St. Marianne said “…remember you will never be a leper, nor will any Sister of our Order.”  This prophecy has been fulfilled. Through all these years, not one of the many  sisters who worked with the lepers has ever contracted leprosy.

St.  Marianne passed to the Father August 9, 1918. When someone commented once after a visit to the leper colony that it would be a mercy to put an end to such a hopeless and miserable life, St. Marianne responded by saying: “God giveth life; He will take it away in His own good time.  In the meantime, it is our duty to make life as pleasant and as comfortable as possible for those of our fellow-creatures whom God has chosen to afflict.”

“Seldom has the opportunity come to a woman to devote every hour of thirty years (at Molokai) to the mothering of people isolated by law from the rest of the world as have been these people. She risked her own life in all that time, faced everything with unflinching courage and smiled sweetly through it all. She came to Honolulu ready to do whatever was required of her. Without blare of trumpets, Sister Marianne entered upon her duties and through thirty long, wearisome years living apart from the world and its comforts, she labored in the cause of a stricken people. She was a heroine in life; she is a martyr in death."   Honolulu Advertiser, August 11, 1918


In my March 13 blog I wrote of my visit to Kalaupapa 40 years ago when I lived in Hawaii. It was  one of those memorable events in one's life probably owing to the holiness of the place, thanks to the two saints and all who have followed in their heroic work. 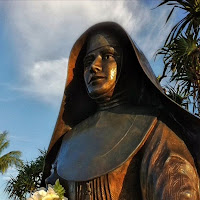 When I lived in Manoa Valley (about Honolulu), in the days when it was still a "jungle", I often went to daily Mass at the Franciscan convent just a few blocks from where we lived. The sisters  (of her Congregation) had a small girls school established in 1924 as a legacy of St. Marianne Cope.

Almost 300 people from the Hawaiian Islands will be trekking to Rome for the canonization. Among the group will be nine patient-residents from Kalaupapa.


A wonderful book telling the whole tale of the saint's life is PILGRIMAGE and EXILE (definitive biography of Mother Marianne of Molokai) by Sr. Mary Laurence Hanley, O.S.F.-1980. Updated by University of Hawaii Press, Honolulu, Hawaii, 1991. Republished with new cover and updated in 2009.

This book is long but reads like a mystery and adventure beyond the wildest telling! One could never have guessed what this gentle soul had to endure at the hands of the men in power in the Hawaiian government- their schemes and duplicity. She just tossed her veil, rolled up her sleeves, and praying, did her job. HIGHLY RECOMMENDED!

To see the infinite pity of this place,
The mangled limb, the devastated face,
The innocent sufferers smiling at the rod,
A fool were tempted to deny his God.

He sees, and shrinks; but if he look again,
Lo, beauty springing from the breast of pain!—
He marks the sisters on the painful shores,
And even a fool is silent and adores.


Posted by mother hildegard at 9:00 AM