VENERABLE HENRIETTE DELILLE's story is most interesting, even controversial. Many sources call her a “free woman of color,” an expression used during the time of Negro slavery in this country to denote a woman of African descent who was not a slave. Mother Delille’s great, great grandmother, Nanette, was brought from Africa as a slave. After the death of her owner, she became free. Some years later, she had amassed enough money to purchase her daughter, Cecile, and two of her grandchildren out of slavery. Spanish law, which ruled in Louisiana at that time, allowed slaves to purchase their freedom at a fair price from the master. A judicial process could be initiated if the owner refused. For the times, and in comparison with slavery in other areas of the American South, it was a compassionate system. Cecile herself became a businesswoman and slave owner.

Ven. Henriette and her family were light skinned enough to pass for white, as they were octoroons, seven-eighths white. Her parents and siblings listed themselves as white in the census but Ven. Henriette used the label free person of color, which applied to all bi-racial people. Her brother Jean  was strongly opposed to her activities. His sister's actions within the Creole community exposed his heritage. Estranged from Ven. Henriette, Jean moved from New Orleans to a small Creole community in Iberia Parish, Louisiana.

The unspoken fact in all of this was that many of these free ladies of mixed African and white blood became “kept women” of the wealthy white planters. Their place in the society of these times was rigid, and there was little other choice for them. Their offspring, therefore, had the national, cultural, and linguistic background of their fathers, as well as the African heritage of their mothers. Therefore, they could be of French, Spanish or other European culture. They led comfortable, even luxurious, lives. They were wealthy families in the city, while their men, the white plantation owners, had their legitimate families in the rural areas, where their plantations were located. In other words, the men openly led “double lives.” Ven. Henriette's own sister, also named Cecile, had several children by a wealthy white man.

As a devout Catholic, one who worked for the conversion to the Faith of those of the Black race in her native city, Ven. Henriette refused to accept this sinful lifestyle and devoted herself to God. In 1836, she wrote, “I wish to live and die for God.” She became a frequent sponsor for mixed-race babies at baptisms, both in St. Louis Cathedral and in St. Augustine Church in a nearby neighborhood. In addition, she was active in the St. Claude School, an establishment founded for the education of young girls of color.

As a result of declaring herself non-white, Ven. Henriette was refused as a postulant by the Ursuline and Carmelite nuns, which were open only to white women. During the 1840’s Ven. Delille began assembling the group of young women who would become the Sisters of the Holy Family. Judging by the books the sisters held in their library, noted Father Cyprian Davis, Ven. Delille’s biographer, they were all literate and intelligent women.

One of their first works of charity was caring for several elderly women, probably former slaves, who lived in the house next door to their own. Thus began one of the congregation’s primary charitable works, caring for the elderly and infirm.

It is interesting that our saint-to-be was a slave owner herself. She freed Betsy, her only slave, in her will. It was simply the way of the time. Another notable fact is the claim that she was not Negro, but Creole, owing to her varied cultural heritage, although she certainly did have African in her ancestry.


Ven.  Henriette Delille’s contribution to the Church in New Orleans, and to Black New Orleanians in particular, was immense. She worked heroically to bring her people to God and to the true Faith. She died at the relatively young age of 52, probably of tuberculosis. Friends attributed her death to a life of service, poverty, and hard work.


Last Monday died one of these women whose obscure and retired life was nothing remarkable in the eyes of the world but is full of merit before God... Without ever having heard her speak of philanthropy, this poor maid had done more good than the great philanthropists with their systems so brilliant yet so vain.

She was declared venerable in 2010. 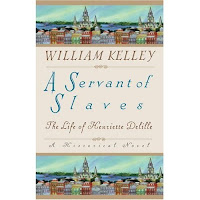 Posted by mother hildegard at 11:47 AM