Another candidate for American sainthood is Slovenian-born missionary Frederic Baraga. His story among the First People reads like an adventure out of Indiana Jones.

He has the unique distinction of being strongly influenced by one saint, Clement Mary Hofbauer, while at university, and being himself a strong influence on another, John Nepomucene Neumann, who devoured the Ven. Baraga's diary and missionary accounts while studying in the seminary at Prague. This influence was the single most motivating factor in St. John Neumann’s decision to offer himself  for missionary work in the United States.

The Venerable Frederic Baraga was born in a castle on 29 June, 1797, at Malavas in the Austrian Dukedom of Carniola (now in Slovenia). The castle was part of a vast fortune inherited by his mother.  Both parents were very pious, giving him a good foundation in the Faith. They both died, his mother first, before he was sixteen years old.

From 1805-1813 Slovenia was taken from the Austrian Empire and occupied by the forces of  Napoleon. In 1816, Frederic entered the University of Vienna where he took a degree in law. Gradually, during his student years, he became convinced that his vocation was to the priesthood. After graduating from the university he entered the diocesan seminary at Laibach in Slovenia, having signed off on his inheritance. Due to the political instability of the times, and the threat of renewed persecution, he was ordained after two years.

As a priest Father Baraga was on fire for souls and the faithful responded to his zeal.  He introduced devotion to the Sacred Heart at his parish in Laibach when it was outlawed by the Austrian emperor, Francis II. Because of his zeal and his opposition to the prevalent oppressive atmosphere of Jansenism, he was sent as an assistant to a remote parish  in Lower Carniola. Soon the heaviness of the burden of being unwanted by fellow clergy moved him to consider the American mission. He responded to an appeal for missionaries from the bishop of Cincinnati and received permission from his bishop to go.

Bishop Edward Fenwick was delighted to welcome the promising young priest. His first assignment was to minister to the German Catholics in the area, while he immersed himself in the study of the Ottawa Indian language. His teacher, who was studying in the seminary there, was the son of an Ottawa chief.  By May he was ready for his first mission. It was among the Ottawas at Arbre Croche, Michigan. Their own chief, Assiginak, had prepared the converts for baptism. While here, after perfecting his knowledge of the Ottawa tongue, Father Baraga composed a catechism and prayer book, the first in that language. He would also compose a grammar book and dictionary of the language, which took him twenty years to complete.


Ven. Baraga labored two and a half years among the Ottawas. It was a very peaceful mission and he lived simply, as one of the tribe, in a small log cabin with a leaky birch bark roof. He did not confine himself only to this mission. He made many ventures on foot deep into the surrounding areas to visit other villages. On one of these excursions, during the winter, his food supply ran out while crossing a Great Lake. After several days he and his guides began to grow very worried when no shore came in sight. While praying, suddenly, out of nowhere, a huge flock of  birds was seen heading for shore. Following their path the party found 130 eggs just laying there waiting for their arrival.

The Ottawas were a nomadic people.  They lived by hunting and fishing and gathering sap and berries, which meant moving seasonally to where there was game. Seeing how they suffered during the winter for lack of food, Ven. Baraga built upon the work of previous missioners who had introduced them to new crops, and agricultural skills, which would nourish them through the long cold months. This stability led to a more flourishing and harmonious village life that helped fortify the family and enhance the education of the children and young adults.

In September 1833, Ven. Baraga left Arbre Croche to found a new Indian mission at Grand River, Mich. He arrived at his destination (now Grand Rapids, Mich.) on the 23d of September. There he labored tirelessly, though not as successfully as at Arbre Croche. In February 1835, he was succeeded by Father Andrew Viszoczky, a Hungarian priest. Ven. Baraga himself estimated the number of his converts at about two hundred, but Bishop Rese estimated the number of Indian converts in his diocese in 1834 at three thousand, with twelve churches or chapels.

Ven. Baraga's next Indian mission was among the Chippewas at La Pointe, Wisconsin. There he labored successfully for about eight years, baptizing 981 Indians and whites. In 1843 he founded the L'Anse Indian mission in Michigan, arriving there in October. For ten years he labored in this vast mission, being for many years the only Catholic priest in Upper Michigan. He attended not only to the Indians, but also to the whites of this vast territory. The discovery of iron and copper drew many German, French, and English-speaking Catholics to the Northern Peninsula of  Michigan. Truly incredible are the hardships and labors of Ven. Baraga at this period of his life. On the 29th of July, 1853, the Northern Peninsula of Michigan was detached from the Diocese of Detroit and Ven. Baraga was appointed its first bishop.

Shortly after his elevation to the episcopal office Bishop Baraga issued two circulars to his people, one in Chippewa and the other in English. His jurisdiction extended not only to the whole Northern Peninsula of Michigan, but also to a large part of the Lower Peninsula, to Northern Wisconsin, and to the North Shore of Lake Superior. He labored in this vast extent of territory for fifteen years, traveling almost incessantly, from the opening to the close of navigation year after year. On the 23d of October, 1865, by Apostolic authority he transferred his See from Sault Ste. Marie to Marquette, where he died at the age of seventy years


One fact that is remarkable about Bishop Baraga is  how much he traveled for 37 years his life.


He covered  over 80,000 square miles including areas of Michigan, Wisconsin, Minnesota, and Canada. Many of these trips were made on foot and under the harshest and most dangerous of conditions - snow, ice, even by canoe.  Though the area was vast, Ven. Baraga was willing to go to any place in order to reach all of the people, particularly his beloved Native Americans. He would journey to them, with them, and for them whenever he could.


No Indian missionary of modern times was more beloved and revered by both Indians and whites than Venerable Baraga . He loved his Indians with a warmhearted devotion which they reciprocated. Men of all positions in society, Catholics and non-Catholics, revered him as an ideal man, Christian, and bishop. Michigan has named after him one of her counties, several towns, and post offices, and his name has been given to one of the principal streets of Marquette. In his native country he is, if possible, even more popular than in America. 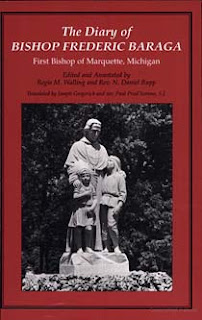 Posted by mother hildegard at 11:31 AM