I recently posted news regarding the destruction of artwork depicting some of our famed saints and founders of our country. I came across an interesting interview (Catholic News Agency) of Canadian sculptor TIMOTHY SCHMALZ, who says it breaks his heart to see the wanton vandalism of sculpture. He told CNA that he believes sculpture is a unique and powerful method of preaching, while at the same time acknowledging the flawed nature of many historical figures.

For me, often these figures can be a reminder that we live in a different age, and can learn from past mistakes.  The art being made today will be judged  by the next generations who will see our flaws.  What if we learned today that Michelangelo  or Rodin or Henry Moore did unspeakable acts in their lifetime.  Would  we destroy their works -  to be lost forever?


Timothy said it made him upset “beyond belief” watching the news and seeing statues of figures such as Christopher Columbus and St. Junipero Serra be torn down. Seeing what he called “a random mob” destroy statue after statue felt like watching “wanton violence against our culture.”  He says the statues, are works of art being used as scapegoats for the country’s perceived historical sins

He has been a sculptor for 30 years and is perhaps best known for his sculpture  the "Angels Unawares" dedicated to migrants in St. Peter’s square.

“I know the amount of time that is spent working on each sculpture and a lot of these sculptures were done a century ago and the skill level, the time that it's been put into that--just on a simple work ethic and good craftsmanship and time and love that is put into it...  Its basic presence is that of time enduring.”

Sculpture, he said, is different from other art forms, as unlike a play or a piece of music, it is intended to be permanent. . “They’re visual ambassadors of that history, and to destroy it--[its] absolute arrogance.”

“I'm a sculptor, I'm a creative, I create, I do not destroy, and I wish more people would follow the role model of creating rather than destroying,” he said. Timothy conceives his sculptures with keen devotion to Catholicism and gives his time to each piece, sometimes taking as much as 10 years forming the idea and sculpting it. 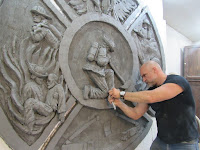 Creation, he explained, is far more difficult than destruction. Some of the statues that were destroyed took years to make, “and they’re toppled in 15 minutes.”

"If my sculptures are used by people as a tool to think, then I’m very happy."