Youth of the world have a new patron in VENERABLE MATTEO FARINA, who died in 2009. Born in 1990 in , he spent his brief but deep earthly life surrounded by love of his family, his friends, his parish community and his girlfriend.

Like  people of his own age, he played various sports and loved music, playing several instruments. He found a music band called “ No name”.
He also had a  passion for chemistry, and would have continued his studies in the environmental engineering field. He also liked all the new information technology.

Two events  marked his life: a dream and the diagnosis of a brain cancer.
When he is 9 years old, he dreamt of St. Pio from Pietrelcina who revealed to him the secret of happiness,giving him the task to spread it to everyone. These are St. Pio’s words according to the story of the young Matteo: “If you managed to understand that who is without sin is happy, than you have to teach it to the others, so that we can go all together happily in the heavenly kingdom”.

This dream led Matteo to understand this was his vocation and he wrote: “I hope to succeed in realizing my mission as ‘undercover agent’ among young people, telling them about God (enlightened from Him)… I look around me and I want to enter in young people’s lives quietly like a virus, infecting them of an incurable illness: Love!”.

When Matteo was 13,  he was diagnosed with a brain tumor. He underwent his first operation in   In spite of this he was still an inspiration to all who came into contact with him, from friends to his doctors and other patients.


“You would like to scream to the world that you would do everything for your Savior, that you are ready to suffer for the salvation of souls, to die for Him. You will have the opportunity of showing Him your love”. 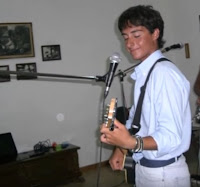 “ Faith is to grasp God to spread his Word. Happiness is the fruit of faith.”  Matteo used to say: “It is useless to despond, we have to be happy and transmit happiness. The more happiness we give people, the more people are happy. The more they are happy, the more we are happy”.

At seventeen, he met Serena, his girlfriend and “the most beautiful gift I could receive from the Lord”. He started to meditate on the mystery of human love as mirroring the love of God. His love for Serena was  a love which became companionship, communion and sharing.

But his illness strike once more, and in 2009 he underwent his third operation, which left him partially paralyzed. He understood that his life might be short, and he wrote: “We must live every day as if it were the last, but not in the sadness of death, rather in the joy of being ready for our encounter with the Lord”

Sometimes  when the pain was simply too much, Matteo wondered where the Lord was.  “Has God deserted you? No. In silence, He’s always at your side, He wipes away your tears and holds you in His arms, until you’ll be strong enough to walk for yourself, holding His hands in yours vigorously. Fatigue. Curl up humbly in His arms and you’ll be sheltered there until good weather will come again. You’ll shine again, then, in His love, giving a caress, a smile, your small contribution to help those who, like you, are in need or tired; bring them to God. They’ll resurrect in turn, with our Lord, to a life of love”. 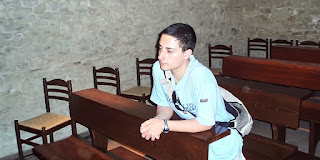 His mission can be described with his own words : “My God, I have two hands, let one of them to be always clasped to You in order to hold You closer in every trial. And let the other hand fall throughout the world if this is Your will… as I know You by others, so let others know You through me. I want to be a mirror, the clearest possible, and if this is Your will, I want to reflect Your light in the heart of every man. Thanks for life. Thanks for faith. Thanks for love. I’m Yours”.

Posted by mother hildegard at 10:08 PM