INFLUENCED BY PARENTS AND THE ARTS


When we speak of art, often it is only the visual arts, and we forget that music is one of our greatest arts.  I wanted to find out a bit more about the Norwegian composer OLA GJEILO (pron. Yay-lo), whose work Ubi Caritas is sung by King's Return-  see previous Blog.  He is one of several who are writing good sacred music in our day. It’s refreshing to find that real art still exists. 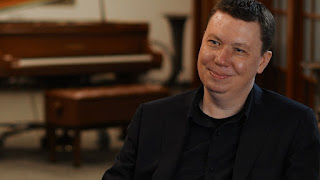 On his embrace of choral music, Ola says, “I can’t quite explain why, but I’ve always gravitated toward choral music. One of the things that I love about the choral world is it’s very warm. There’s a lot of heart.”

He was born in Skui, on May 5, 1978, to parents who loved music, everything from classical to jazz, pop and folk music. They certainly encouraged his talents from an early age.  He began playing piano and composing when he was five years old and learned to read music when he was seven years old. He studied classical composition with Wolfgang Plagge, another well known Norwegian composer.

In his undergraduate career, Ola studied at the of Music (1999–2001), transferring to the Juilliard School (2001) in . He also studied film music at the University of S. California, inspired by the improvisational art of film composer, Thomas Newman (The Player, The Shawshank Redemption, The Green Mile, Finding Nemo, WALL-E, the James Bond films Skyfall, Spectre, and the war film 1917.)

He lives in , working as a freelance composer. He is currently composer-in-residence with DCINY and Albany Pro Musica.

He is one of the most frequently performed composers in the choral world. An accomplished pianist, improvisations over his own published choral pieces have become a trademark of his collaborations. It is perhaps Ola’s adopted country of that has influenced  his distinctive soundworld the most, evolving a style that is often described as cinematic and evocative, with a lush, harmonious sound. In an interview he mentioned being influenced by Brahm's  Requiem and that his favorite composer is Rachmaninoff (who is also mine) being blown away when he first heard the 2nd Piano Concerto. 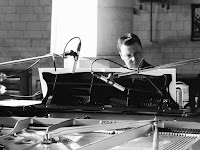 “I always wanted my music to be uplifting in some sense, even if the music is sad or dramatic. The goal for me is always that the listeners come out of it feeling more inspired and uplifted than before; that when there’s a lot of conflict, even anguish in the music, there’s still a resolution at the end of it – something that transcends the conflict. I think that’s what we generally want in all areas of life; in war, relationships, everything. If there’s conflict, we want resolution. We want there to be peace, and that’s how I feel about music too. I want it to inspire harmony.”

An example of how the arts can be interwoven, Ola says glass artist Dale Chihuly  (of ) and architect Frank Gehry had a great influence on his work. I advise you to go to Youtube and listen to his work. His music inspires- prayer indeed in these times of need!

His LUMINOUS NIGHT OF THE SOUL is a masterpiece: " The Central Washington University Chamber Choir (Gary Weidenaar, director) joined by Ola Gjeilo on the piano and the Kairos String Quartet (comprised of CWU string faculty).

Long before music was sung by a choir,
Long before silver was shaped in the fire,
Long before poets inspired the heart,
You were the Spirit of all that is art.

O guiding night!
O night more lovely than the dawn!
O night that has united
the Lover with his beloved,
transforming the beloved in her Lover.
( of the Cross)


Posted by mother hildegard at 9:54 AM