HUNGARIAN LOVER OF THE EUCHARIST

In this crises time in our world and in our church, many are not able to get to Mass on a regular basis but there are usually weekday Masses and sometimes even adoration of the Blessed sacrament.

Our second holy man of the Eucharist  was the Hungarian chaplain János Brenner (born 1931), who died guarding the Eucharist on 15th December 1957.

JANOS BRENNER was ordained a priest by bishop Sándor Kovács on 19th June 1955 in the cathedral of . He celebrated his first mass in the St. Norbert church of that town. He became the chaplain of Rábakéthely, in the second district of Szentgotthárd, near the Hungarian border. 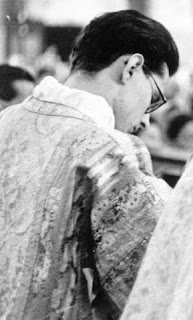 Father János was ready to make any sacrifice for the faithful. He especially loved  children and youth.

One of the faithful remembers:  "He had a certain glow which cannot even be described in words. The people loved him, and loved to listen to his words. There was something in him, what attracted the people. This was his main crime.: both the young and the old loved him. He won a great number of people for the faith and the Church. He could not pass by a person without stopping  to talk to them even a word or two. He always had a beautiful smile on his face... He seriously announced the Word of God and testified his faith in every minute. He was a very good confessor since he always gave some advice for our lives."

His charism was  not seen favorably  by the Communist regime, especially in hi work with the young. The representative of the state for the Church wanted to remove him from the community. When the bishop informed  Father Brenner about this, he replied: "I am not afraid, it would be a pleasure for me to stay." The bishop stood by the chaplain and decided to leave him in Rábakéthely. The representative said: "Well then, you shall see the consequences, too."

Father János clearly saw that his vocation was trying at the time. He wrote in is spiritual journal: "My Lord, You know, that I do not seek happiness in this life, since I have put my everything into You... I know, my Lord, that You do not save yours from suffering, since they got a tremendous profit from it."

One autumn evening, when he was on his way home on his motorcycle from Farkasfa, unknown ruffians threw logs in from of him, but he managed to avoid them. When he arrived at home, he said "They weren't lucky", and had a good laugh.

It is still not clear, not even today, what exactly happened on the night of 14-15 December 1957. There are only  a few pieces of the puzzle: testimonies of the suspects and of the convicted and some memories of  witnesses, which Dr. Frigyes Kahler, law-historian reconstructed.

Around midnight a 17-years-old man knocked on the door of the parish with the request that his seriously ill uncle should be given the Sacraments. Father János  went to the church, and took the Eucharist, placing it in the pyx, and with his companion started towards Zsida on the pitch-dark way leading through the hills. On the way he was attacked many times, but he managed to escape. In the end he was caught near the house of the supposed-sick-uncle.

And there, with the Eucharist around his neck, they stabbed him 32 times. From the autopsy report we also know that multiple fracture of the hyoid bone and the horns of the laryngeal cartilage were visible on the body. This cannot be caused by strangling; this injury occurs by stepping on the neck and trampling on it. On the white collar belonging to the cassock ground samples were visible, and the silhouette of a sole could also be seen. So, they wanted not only to kill him, but also humiliate him, too.

The investigation was merely a show, everyone was a suspect, even the parish priest. In the end one person was sentenced to death by the courts, but the Supreme Court released him. Later that boy was sentenced, who called János Brenner from the parish.

"God works with those who love him" (Rom 8,28) - the first-mass-motto of János Brenner was the main lead of his life as a priest. He lived and died by this spirituality for Christ and for those entrusted to him. His short, but God-loving life was for the good of all and also (or maybe mainly) is death, since his blood is also the sowing of the Christianity. "The good shepherd lays down his life for his sheep" - that is, what János Brenner did: he gave his life for a non-existent sick, he laid down his life for his vocation and Christ. He was capable of all the sacrifices. He did not fear threats or being persecuted. 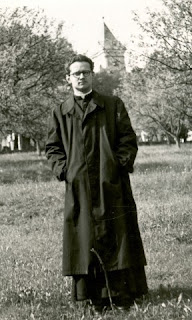 During the investigation many charges were brought against him (jealousy, human trafficking) looking for the motive of the murder, but they could not find a single person, who would speak ill of him. After the investigation someone said: "They have just conducted the process of the canonization of János Brenner!" The life of the pure-hearted, honest and faithful to God priest was obvious for everyone. His was not a human trafficker, but a fisher of men.

Posted by mother hildegard at 8:01 AM