MARTYR FOR THE EUCHARIST IN MEXICO

In a Blog last year (9/5/19)  we briefly mentioned ST. PEDRO de JESUS MALDONADO, as one of the Knights of Columbus martyrs, but he was also a defender of the Eucharist. He  was a priest during the anti-Catholic rule of Mexican President Plutarco Calles. Father Pedro Maldonado was a great priest in during the anti-Catholic persecution, helping prepare children for their First Communion and serving the poor. 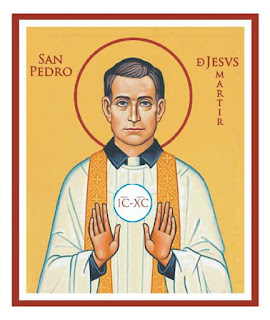 When he was 17 years old, he entered the diocesan seminary, where he was known for his piety; once, after completing the Spiritual Exercises of Ignatius of Loyola, he told the rector of the seminary "I have thought of always having my heart in heaven and in the Tabernacle."

Due to the political situation in , he left to study for the priesthood in where he was ordained on Jan. 25, 1918.

St. Pedro worked with the Tarahumara Natives and sought to reduce the amount of alcohol they consumed. He helped the poor with money and clothing, and raised and educated a poor orphan. He took a special interest in the religious education of both children and adults, explaining Catholic doctrine by using photographs. At harvest time, farmers would ask him to bless fields invaded by locusts, and there are accounts that claim his prayers expelled the locusts more than once.

On February 10, 1937, Ash Wednesday, drunken men with guns came into his church, threatening to arrest him. The priest quickly grabbed the church’s pyx of consecrated hosts before the thugs pushed him out into the street. He was dragged by the hair to the region’s political leader, Andrés Rivera, who hit the priest so hard on the head with his pistol that he damaged his skull and eye. The gang began beating Father Pedro, but the priest held his pyx tightly, until a direct blow knocked it loose.

The hosts spilled on the ground, and one of the thugs shoved them into the priest’s mouth, sneering, “Eat this! Your last Communion.” The holy priest did just that. He died the following day in a hospital. 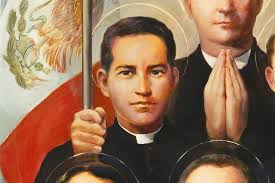 He is the first canonized saint and  martyr from Chihuahua City, Mexico, yet holds a special place in the hearts of the people of El Paso, Texas. In this day and age when so few believe in the true presence of Christ in the Eucharist, he is a good example for those who hold to the true faith!


Posted by mother hildegard at 9:33 AM