FIFTY YEARS OF A LIFE GIVEN 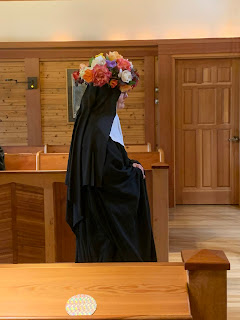 On the feast of , our MOTHER DILECTA PLANANSKY celebrated her 50th anniversary of vows.  Due to “lockdown” her family was not able to come from to help us celebrate, but celebrate we did! She received a blessings from the Holy Father to start the week and Thursday was a special Mass and her favorite meal- Mexican. She received many cards and gifts from all her have known her throughout the years, including past interns.

On Saturday we had a “picnic” with several of our Oblates who have been quarantining on the island.
While Mother was raised in S. California, she was born in Wyoming, when her father was in the military during the war. Both parents were teachers and instilled in Mother a love of learning, which continues to this day. 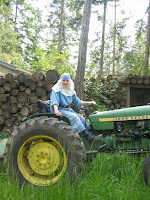 Mother entered the Abbey of  Regina Laudis a few years after college, having graduated from the   for Women, which is now the  of  a private Roman Catholic university founded in July 1949.  She majored in English, which is shown to this day by her love of Scrabble. She is always looking for new words, and is noted for her  sensitive poetry.

Mother has been in charge of the vast vegetable gardens, as well as the herd of cattle and dairy cows.
.
Mother has also served us as sacristan and liturgist. Like all of us she wears many hats.  Here is one of her poems:

waking very early
solidly dark here in the West
day dawning on the East coast
I find myself praying among the stars
darkness not a void but
a setting for the stars,
interplay of dark and light.

an owl murmurs,
murmuring a question
...we know now the answer
a stark 2,817 soul mates,
at least 2,817, the number unsure
as survivors of ground zero surface
having forgotten their own names

so brief the passing
of the shooting star
then across the sky
a pace  regular and magnetic
the passage of a plane silently
(for some the last sensing was
sound and firey, fuel-fury).

From the distance of today
a stark beauty and patterned
meaning emerges in the sky:
somehow imbedded in the vastness
"Yahweh, God our God is One
Allah is great
Bless be Jesus Christ,
Firstborn of all creation"
someday to be uttered as
effulgence not controversy.

but the stars unseen
are always with us.

Posted by mother hildegard at 10:38 AM