One of the more shocking stories of 2019, was a survey from the showing that only 28% of American Catholics know and believe the Church’s teaching on the Eucharist, that Christ is truly present.

But there are some who knew with such certainty that Jesus Christ is truly present in the Blessed Sacrament that they faced danger to be with Him, and there are those who died rather than let the Blessed Sacrament fall into the wrong hands.  As we consider the Eucharist through the summer of lock-down in many areas of our world, I am reminded of some modern day martyrs who had great devotion to the Eucharist.

Our first is a priest who could have been asked, “Are you happiest at Mass?” FATHER JACQUES HAMEL certainly was. And that is where he died. 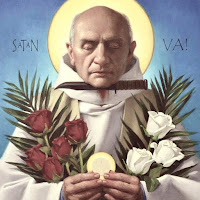 On July 26, 2016, two men armed with knives burst into Saint-Étienne-du-Rouvray parish in . There, Father Jacques Hamel, 86, who had been a priest for 58 years, was celebrating Mass, which he called “the essential element” of his every day. His sister said her brother “was transformed at the moment of consecration … the more he aged, the more it was the passion of Christ that he lived.” Terrorists burst into Mass one Thursday morning promising to “do away with” all Christians. They drove the old priest to his knees and slit his throat at the altar, shouting “Allahu Akbar!”

Amazingly enough, Father Hamel had worked to better relations with the Muslim Community. With local imam, Mohammed Karabila, the president of 's regional council of Muslims, Father Hamel worked since early 2015 on an interfaith committee. After the priest's death, Karabila described him as his friend with whom he had discussed religion and as also someone who gave his life for others.

Calls to make him a saint started soon after his death. The canonization cause was officially opened at diocesan level in April 2017, after Pope Francis had waived the otherwise mandatory five-year waiting period for the opening of such causes. The beatification of a martyr does not require a miracle because martyrdom is already testifying to a special help received from God. 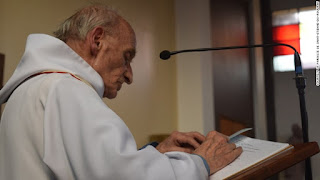 When a fellow priest told  the octogenarian to retire, he replied, “I will work until my last breath…there are not enough priests.”

In a letter to parishioners just weeks before he died, Father Hamel wrote, “May we hear … God’s invitation to take care of this world to make it, where we live , warmer, more human, more fraternal.”  Very fitting for our own country today with all the bitter fighting.

Posted by mother hildegard at 10:44 AM