FEAST DAY for the SYBIL of the RHINE

Today is the feast of  SAINT HILDEGARD of BINGEN

It is hard to decide where to begin on the long journey of her multi-faceted life.


St. Hildegard was born in 1098 and was raised in a family of  free nobles. Her parents were Hildebert and Mechthilde. Her father was a soldier in the service of  Meginhard, Count of Spanheim. Hildegard was a weak and sickly child, and thus received little education at home. Her parents, though engaged in worldly pursuits,  promised the child to the service of God. At the age of eight she was placed under the care of Jutta, sister

of Count Meginhard, who lived as a recluse on the Disenberg in the Diocese of Speyer. Here also Hildegard was given little instruction since she was much afflicted with sickness. She was taught to read and sing the Latin psalms, sufficient for the chanting of the Divine Office, but never learned to write. Eventually she was invested with the habit of St. Benedict and made her religious profession. Jutta died in 1136, and Hildegard was appointed superior. Numbers of aspirants flocked to the community and she decided to go to another locality, impelled also, as she says, by a Divine command. She chose Rupertsberg near Bingen on the left bank of the Rhine, about fifteen miles from Disenberg. After overcoming many difficulties and obtaining the permission of the lord of the place, Count Bernard of Hildesheim, she settled in her new home with eighteen nuns in 1147. Around 1165 she founded another convent at Eibingen on the right side of the Rhine, where a community had already been established in 1148, which, however, had no success. This is where the Abbey which bears her name stands today.

St. Hildegard was a visionary. Through much of her life, she experienced powerful visions, some of which she dictated and which are contained in three volumes. She illustrated these texts herself, which are unique and powerful in their originality. She also wrote poems, plays, hymns (many of which today can be found in recordings).

Her play Ordo Virtutum is about morality and is the only Medieval musical drama to have survived with both the text and music.

She made up an alternative alphabet and modified Medieval Latin by using many invented and abridged words, and named it Lingua Ignota. She mainly used it to increase solidarity among her nuns.


Her prophetic mind wanted to rouse the people of her time, persuade them to change their ways and act against a growing godlessness. She often traveled to preach God's messages. When the Church questioned her visions and words, St. Bernard intervened, proclaiming her a woman of God. 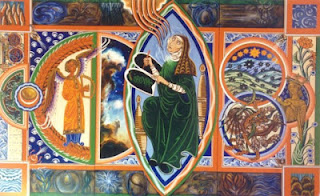 St. Hildegard perceived herself as God's advocate, spokeswoman and instrument. Time and again she directed attention to the mystery of the Almighty and disclosed divine love to her readers and listeners as the source and completion of all being. Her visions she dictated to her scribe, the monk Volmar.


Even though she suffered from poor physical health her whole life, she was a woman of indomitable energy and great mental strength.

She is today noted for her works on medicine and natural history and knowledge of the curative powers of natural objects, especially herbs, and is sometimes regarded as one of the sources of modern medicine. She wrote the books Physica (about the study of botany, zoology, elements, metals and stones; describing their physical and medinicial proporties) and Causae et Curae  (about the study of causes and cures of diseases). Due to her lack of a formal education, experts are puzzled by her knowledge of so many areas of science.


She did all this during a time in which women were accorded little respect as artists and intellectuals, yet the effects of her experiments and advancements in music, art, and healing continue to this day.


The next blogs will deal in detail about the various facets of her extraordinary life.


Posted by mother hildegard at 1:08 AM