Ever since the works of St. Hildegard of Bingen have been translated from the difficult medieval Latin into German, English, and just about every other language spoken by humankind, there has been a plethora of products on the market, some related to her writings, music, herbal recipes, etc. There have been videos and movies, coins and money, stamps, foods, medicine and beauty products. She has been named after streets, gardens, hospitals, clinics, schools of every level and of course churches (which one would expect).  She has become the patron saint of the woman's movement (not always in the spirit of her life). The once quiet Abbey on the Rhine now has as many visitors in a year as Disneyland! It is a though everyone wants a part of the life of this amazing Saint, yet few really take the time to understand her, and, her gifts to us in this day and age. Hopefully the past blogs have given you some insight into her life.

She has been called visionary, musician, poet, philosopher, theologian, Church reformer, author, herbalist, healer, scientist, ecologist, biologist, geologist, correspondent, linguist, inventor, feminist, and on and on.  So many titles for one lifetime!  No matter what we call her she was a woman ahead of her times, a woman for all ages!  Now this polymath Abbess is called SAINT.

A very well done DVD  (in English) A Feather on the Breath of God, is a dramatization of St. Hildegard's life, featuring excerpts from her writings as well as her exquisite songs of prayer. The English actress, Patricia Routledge, plays the saint.

In the Symphony of the World: A Portrait of Hildegard of Bingen
TV2/Denmark
A film in the WOMEN OF POWER © Series

There are several German series(  which I know nothing about but which had a good audience in that country), a German TV cooking series, a series on Polish TV, and another in Italy. Her ORDO VIRTUTUM has been played in every country in the western world, an opera was written about her in Venezuela. Famous actresses, such as Linn Maxwell & Alison Neil, have enacted her life or parts of it

The most well known movie today is VISION. Margarethe von Trotta brings the story of this extraordinary woman to life. In a staggering performance, acclaimed actress Barbara Sukowa portrays  the saints fierce determination to expand the responsibilities of women within the order, even as she fends off outrage from some in the Church over the visions she claims to receive from God.

Lushly shot in medieval cloisters in the German countryside, this is a profoundly inspirational portrait of a woman who has emerged from the shadows of history as a forward-thinking and iconoclastic pioneer of faith, change and enlightenment. German with English subtitles.

MONEY, which one would hope the German Government would issue in her behalf, since they make so much money off of her annually! 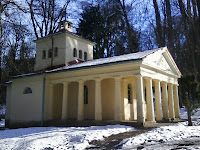 CHURCHES, especially in Germany, though I am sure more will spring up now that she is "official". A favorite is a small church in the Czech Republic which I was fortunate to visit in 1989.

PRODUCTS of every kind imaginable, sometimes claiming to go back to her directly. It does not take much imagination to see that people, not from the 12 century, have good marketing skills! In Germany, France, Italy, Poland, the Czech Republic and most European countries one can find health foods of all kinds and beauty products.