St.  Hildegard wrote letters to popes, cardinals, bishops, abbots, kings and emperors, monks and nuns, men and women of various social levels both in Germany and abroad.  Some of her letters are more personal, but the majority are mystical treatises, prophecies, sermons, and strong exhortations concerning the various corruptions of the day. St. Hildegard’s clear intelligence foresaw that the ecclesiastical and political abuses of her time would ultimately lead to the catastrophic events of the Reformation and the Thirty Years’ War.

Her letters have been translated into the English and fill 3 volumes. This study consists of nearly four hundred letters. Addressed to some of the most notable people of the day, as well as to some of humble status, the correspondence reveals the saint in ways her more famous works leave obscure: as determined reformer, as castigating seer, as theoretical musician, as patient adviser, as exorcist.

Sometimes diffident and restrained, sometimes thunderously imperious, her letters are indispensable to understanding fully this medieval saint and her works. In addition, they provide a fascinating glimpse at life in tumultuous twelfth-century Germany, a period of schism and political unrest. This first volume includes ninety letters to popes, archbishops, and bishops.

In the second volume are letters to lower-ranking spiritual leaders (abbots and abbesses, for the most part) offering advice and consolation, and is particularly noteworthy for the correspondence with Guilbert of Gembloux, who provides a wealth of information about the saint and her spiritual gift.

The third volume contains  letters to a non-ecclesiastical audience, letters not just to such high-ranking notables as Frederick Barbarossa, King Henry II of England, or Eleanor of Aquitaine, but also to common, ordinary individuals of no importance whatsoever, excpet that they received a letter from St. Hildegard of Bingen. 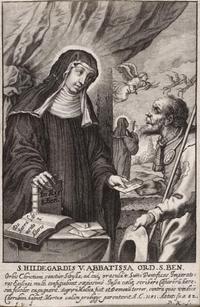 Addressing matters as diverse as the "humors" and their relation to health and salvation, the fate of departed souls, the frequency and horror of homicide in her age, the proper attitude and response to the fact of excommunication, and male infidelity in marriage, St.Hildegard provides a unique view of the twelfth century world. Here also are found compositions in style that are actually sermons, mediations, prayers, or treatises on a wide range of theological topics, such as prophecy, celebration of the Mass, the Lord's Prayer, the creation, and the fall of Adam. Her letters are a good way to begin to understand this often mysterious saint and her age.


Posted by mother hildegard at 8:10 AM