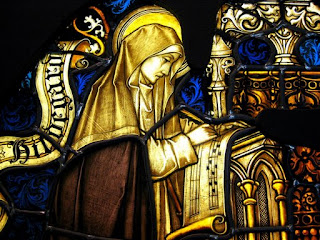 Perhaps the one facet of  St. Hildegard's genius most known throughout the world is her music. It has been recorded in every country in the western world. When I lived in Germany I got several of the recordings of her music sung by the nuns at her Abbey. 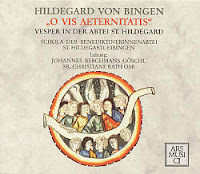 To this day I think these recording more readily capture the essence of who she is, and the beauty of her work, than any of the professional groups singing her music. One reason is the music is sung in the Abbey Church which is solid stone and I am sure is what the saint herself would have known. The music echoes and floats. Another reason is the nuns are praying not performing, thus there is more of a spiritual quality to the music.

Musically, the most important thing that St.Hildegard experienced as a child in the monastery was the opportunity to take part in the Divine Office. Every day, the nuns sang during the Divine Office and at the celebration of the Eucharist. Most of St. Hildegard's music was written for the eight  hours of the Divine Office. The hours consisted of readings from scripture and singing of the psalms and hymns which gave the nuns an opportunity to encounter God through a specific mood or season of time. She wrote music and texts to her songs honoring saints and Virgin Mary for the holidays and feast days. St. Hildegard produced poetry and music for more than 71 liturgical songs and a morality play. 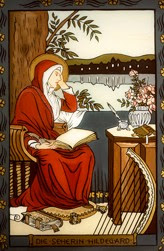 Without formal education in singing or music she began to compose. St. Hildegard was a very passionate person so as a composer, she expressed herself both in the sound and in the words of her music. In contrast to the narrow scope of most chants in her day, her music has a very wide range. She uses extremes of register as if to bring heaven and earth together. Plainchant rarely used intervals larger than a second or third. St. Hildegard's music vaults upward and downward with wide intervals of fifths and fourths giving it a very ethereal quality.

While St. Hildegard's visions and music have been hijacked by the New Age, there are plenty of wonderful recordings out there. Her music had something of a “pop culture” moment back in the mid 90s, when Richard Souther’s album Vision: The Music Of Hildegard von Bingen became a hit. It ended up winning the Billboard Classical/Crossover album of the year award. 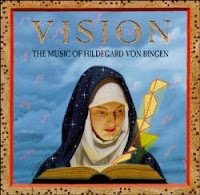 Purists recoiled at the use of modern instrumentation. But who is to say that future artists should rule out any similar innovations as they rediscover St. Hildegard’s music for the 21st century?
After all, the saint herself was a mystical genius who pushed beyond the boundaries of the musical conventions of her own time.


Some say the best recording was Emma Kirkby's, A Feather On The Breath Of God (1982). 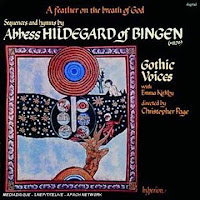 But if I had to recommend a single purchase for someone wishing to learn from this saint, it would have to be the complete works of St. Hildegard recorded by the ensemble for medieval music, Sequentia- an amazing project released in successive years during the 1990s, that is unless you can get the real deal by the German nuns at St. Hildegard's. 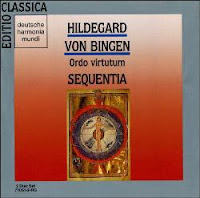 Posted by mother hildegard at 9:52 AM