This is a big year for my patroness! She was/is a character "larger than life" and so I would like to do some blogs on this very talented woman.

In May of this year she was officially canonized by Pope Benedict XVI.  How could she be called SAINT for over 800 years and not be canonized???  Because we will have two American women canonized in October, I will spend some time explaining the process.

Canonization is the act by which the Catholic church declares a deceased person to be a saint. Once made a saint the person is included in the canon, or list, of recognized saints. Originally, individuals were recognized as saints without any formal process (as it is still done in the Orthodox Church).

The official process for declaring someone a saint is called canonization. Prior to the year 1234, the Church did not have a formal process as such. Usually martyrs and those recognized as holy were declared saints by the Church at the time of their deaths. Before the legalization of Christianity in the year 313 by Emperor Constantine, the tombs of martyrs, like Sts. Peter and Paul, were marked and kept as places for homage. The anniversaries of their deaths were remembered and placed on the local Church calendar.

Beginning in the 10th century, the Roman Church asserted that no one could be venerated as a saint without its approval. The first recorded canonization of a saint is Ulrich of Augsburg by Pope John XV in 993.

The primary purpose of canonization is to officially authorize veneration and intercession of a particular saint. The investigation process that proceeds canonization seeks primarily to ensure that the person is in heaven and God is working through him or her.

Usually between 5 and 50 years after a person's death, a formal request is made to consider that person a saint. The group making the request consists of people from the candidate's church and community, and the request is directed to the bishop of the diocese where the person died. The request includes testimony of the person's exceptional virtue and dedication to God.

The bishop decides whether the evidence is compelling enough to take it to Rome. If so, he asks the Congregation for the Causes of Saints for permission to open the cause. If permission is granted, the bishop opens a tribunal and calls witnesses to attest to the quality of the person's public life. The person must be shown to have been virtuous, devout, religious, and characterized by love, kindness, prudence and other virtues, and concrete examples are required. Miracles are not necessary at this point, but they are recorded if mentioned.

If the person passes this step, he or she is called a Servant of God.


The bishop sends a report to Rome, where it is translated into Italian. Nine theologians scrutinize the evidence and documentation.
If they approve, the Prefect of the Congregation authorizes person to be called Venerable.


The next step is beatification. A martyr may be beatified and declared "Blessed" by virtue of martyrdom itself. Otherwise, the candidate must be credited with a miracle. In verifying the miracle, the Church looks at whether God truly performed a miracle and whether the miracle was in response to the intercession of the candidate saint. Once beatified, the candidate saint may be venerated but with restriction to a city, diocese, region, or religious family.


After beatification, another miracle is needed for canonization and the formal declaration of sainthood.

Being canonized as a saint means that:


Pope Benedict seems to have a soft spot for Hildegard. Back in 2010, he devoted not one but two of his Wednesday general audience talks to her. It took a German Pope to "get her on the books". 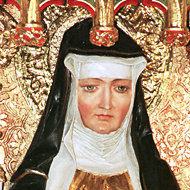 The Pope’s May 10 announcement was a case of “equivalent canonization”. The process was established in the 18th century by Pope Benedict XIV. It takes place “when the Pope enjoins the Church as a whole to observe the veneration of a Servant of God not yet canonized by the insertion of his feast into the liturgical calendar of the universal Church, with Mass and the Divine Office.

An “equivalent canonization” usually occurs, as in the case of St. Hildegard, when veneration of the saint is already well established in Church traditions, but for various reasons the formal process of canonization has not been completed. Other saints who were canonized by this form include Sts. Margaret of Scotland, Stephen of Hungary, and Wenceslaus.
Posted by mother hildegard at 4:48 PM