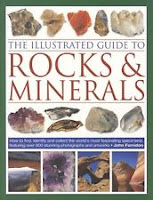 My love of geology- minerology stems from my childhood, where I collected everything I could find, from seashells to polished river stones, to refuse from the gold mine on my grandfather's cattle ranch in the mountains of Colorado.
In my monastic life I have been able to put that "passion" to use in work with Island children in geology for a 4-H club. We have studied jasper of the world, minerals of our area, of our state, and rock formations. This year? who knows, maybe the minerals St. Hildegard knew. It is as much fun for me as for the children!

St. Hildegard  is regarded as a serious mineral collector who is credited with raising awareness of minerals and their properties. “Early ideas about the genesis of rocks and the functioning of geological phenomena stemmed from a mythical approach to natural phenomena.This approach was the usual one throughout the European Middle-Ages, and is wonderfully illustrated by the writings of  St. Hildegard  dealing with the origin and purpose of rocks and minerals.”
(German geologist M. Kölbl-Ebert).

Where St. Hildegard found her minerals is the subject of much speculation, but several sources would be in the area around what is now the town of Idar-Oberstein in the Rhineland-Palatinate, where mineral collecting
goes back probably to Roman times and gem cutting has been flourishing for more than 500 years.

Minerals commonly found in that area are jasper, quartz, amethyst, and highly prized agate. The agate was said to have magical properties because it often contained a core resembling an eye and the mining and exporting of it brought considerable prosperity to the area in the late middle ages.


Various examples of beryl (particularly aquamarine) chrysprase, topaz and garnet would also have been available within the area. More precious stones, such as diamonds, and pearls, were not available locally but may well have been presented to St. Hildegard as gifts from well-traveled friends and admirers.

According to St. Hildegard, gemstones are formed through the powerful combination of water and fire; therefore, they hold powers corresponding to these phenomena. She also believed that each stone had a certain, divine blessing from God. During the medieval era, healers employed gems for treating diseases, assigning specific stones for particular symptoms. Age-old uses of gemstones as healing agents survive today in the realm of holistic and alternative medicine.

Unfortunately, this is one of the attractions to New Agers!  But just as acupuncture and other non-traditional holistic practices, that were shunned years ago, are now finding favor in traditional medicine, who knows where others forms of ancient medicine, such as the use of stones, will one day be found by scientists to be effective in treatment of disease.

There are several lists of minerals attributed to St. Hildegard’s collection, some giving the specific ailments for which they could be used. The following one seems to have some authority. (From “Hildegard von Bingen: Das buch von den Steinen”, published the Kristallmuseum, Riedenburg, Germany, 1995.)

-Emerald: for headaches
-Onyx: the saint recommened this for stomach ailments & speen diseases
-Agate or chalcedony:  a remedy against fever & to calm irrational tempers
-Sapphire: for gout and eye pain

Posted by mother hildegard at 4:03 PM