Among St. Hildegard's writings are her thoughts and opinions on the physical values of various foods. When I was at our monastery in Italy in 1993, I discovered a cookbook called: in the Kitchen with St. Hildegard.

I waited many years for it to be released in English. Now it has been translated into almost very language in the western world.

From Saint Hildegard's Kitchen: Foods of Health, Foods of Joy by Jany Fournier-Rosset
This rather unusual cookbook derives its recipes from the saint's theological and visionary writings, although a few are directly from the saint herself. 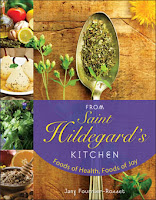 This is not a meat and potatoes diet, but surprisingly well-balanced, considering the limitations of medieval fare. There is an emphasis on greens and grains, especially spelt, which  today many health-conscious include in their diet. Dishes vary from the simple, using only a few ingredients, to the much more complicated, requiring a very well stocked pantry.

Some of the ingredients may be unfamiliar to most modern cooks in this country but for us monastics, not so. For an example, nettles, are generally considered a weed, but St. Hildegard makes an omelet with them, praising their purgative, restorative, and stimulative virtues.

When I was a novice I was big on natural foods found in our woods and fields, often cooking them for the Community. Nettles were a favorite, especially Scottish nettle-barley soup.

St. Hildegard divided foods according to their "healing" properties.

Spelt is the basis of her cooking, followed by fruits and vegetables and a modest use of meat, game, fish, milk and milk products, herbs, spices and drinks. St. Hildegard did not rate the food according to it’s calories but according to their medicinal values.

Meat should be from animals which eat grass and hay and don't have too many offspring  ( a thought to modern growers who force feed in unnatural stock yards). Butter and cream from the cow are good, but milk and cheese are better from the goat (hmmm, we won't tell our milk customers that!). Sunflower and pumpkin seed oils are good but olive oil is reserved for medicinal purposes (Italians have something to say about this).

She says to stay away from "Kitchen Poisons" such as eel, duck, crab, pork, fatty meats, peas, cabbage, cucumbers, leeks, lentils, mushrooms, peaches, plums, strawberries, blueberries, elderberries, refined sugar, white wheat flour, and raw food. "In case of disease such as cancer, no animal protein should be eaten at all".

For drink she recommends beer. Some think she "invented" this drink as we know it today.  Her writings include the earliest known reference to using hops in beer.

When put in beer hops "stops putrification and lends longer durability." Today the nuns at St. Hildegard's Abbey on the Rhine are famous for their wines. Beers??? I don't think so!


St. Hildegard's Cookies of Joy
St. Hildegard said that these spice biscuits "should be taken at regular intervals to increase joy and positivity".
(I suppose like any good mother, she knew sugar and spices make us all content, even for a short while). 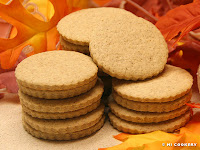 Heat oven to 350°.
Cream butter cream  with the brown sugar. Beat in the egg. Sift the dry ingredients. Add half the dry ingredients and mix. Add the other half and mix thoroughly. Dough may be chilled to make it workable. Form walnut sized balls of dough, place on greased and floured cookie sheet and press flat. Bake 12-15 minutes till edges are golden brown. Cool for 5 minutes, then remove from cookie sheet and finish cooling on racks.  Makes about 30 cookies.

Monastery Nettle-barley soup
In the springtime harvest young stinging nettles, about 10-12 cups. (be sure and wear gloves- they will be safe to touch once blanched!). Wash and chop.
Cook one cup of pearl barley in 8 cups of beef  broth with the chopped nettles.
Cook covered over low heat for 30-40 minutes, until barley is cooked.
Season with salt and pepper. Serve hot.


Posted by mother hildegard at 9:35 AM