EARLY MISSIONARY TO OUR LOCAL TRIBES

Years ago we read a wonderful book  (Paths to the Northwest,  Wilfred Schoenberg, SJ)  on the arrival of the Jesuits in the .  If other missionaries were mentioned, I don’t remember, but recently I came across one of the very first.  Catholic missionary EUGENE CASIMIR CHIROUSE, Oblates of Mary Immaculate (O.M.I.), traveled from his native to with four Missionary Oblates and, after an arduous trip, arrived at on October 5, 1847 -- only a month before the Whitman Massacre.

By the time the Oblates of Mary Immaculate arrived in the , fur trappers, the military, Protestant missionaries, and Catholic bishops had preceded them. Traveling from  with parties of the ’s Bay Company, Father Francois  Blanchet (1795-1883) and the Rev. Modeste Demers (1809-1871) arrived at   in 1838, the first Catholic priests to establish themselves in what eventually became .

Much of the missionary passion to Christianize the West is attributed to one event. In 1831, four Indians (possibly Nez Perce) traveled from west of the Rocky Mountains to  to meet with explorer William Clark (1770-1838), Superintendent of Indian Affairs. They asked to learn more about the white man’s religion. 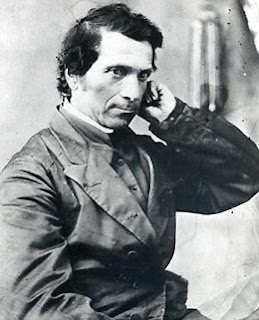 He was ordained with Charles M. Pandosy (1824-1891) at on January 2, 1848, the first Catholic ordination in what would become the state of . Father Chirouse lived and worked among the Yakamas from 1848-1856 and for a short time was missionary to the Cayuse tribe. The Oblates attempted peacemaking during the tensions that culminated in the Yakama Indian War, but in 1857 were transferred to for their safety.

Father Chirouse was assigned to oversee tribes and lived on the Tulalip (very close to our island) reservation from 1857 to 1878. Here he established a school and church, the Mission of St. Anne, and helped to build missions on the Lummi (even closer and we have many friends from that tribe) and Port Madison reservations.

Father Chirouse was a master of Salish dialects, translating the scriptures, authoring a grammar and a catechism, and creating an English-Salish/Salish-English dictionary. In his advancing years, the well-loved priest was transferred to a post in , despite protests from his Tulalip parishioners. He returned to Tulalip many times to visit friends and to perform weddings and baptisms. Father Chirouse died in in 1892. 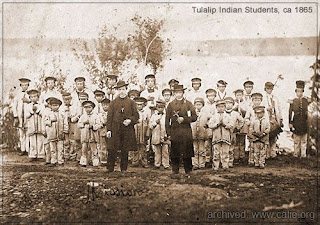 In a long letter addressed to Father Fabre, in 1892 (Missions OMI, 1893, pp. 129-161, Father Émile Bunoz gave an account of the funeral of Father Chirouse which took place on May 31, during a mission being preached to several hundred Amerindians in the mission of Sainte Marie.

“A humble apostle of the poor and the unlettered, he well deserved to be accompanied to his last resting place by the disinherited ones of the earth. Our valiant missionary was one of our first pioneers in those early days on the Pacific coast. Having arrived in in1846 (1847) he carried his tent to all the native encampments of that vast province. In the end he settled for many long years in Tulalip.

He endured all the privations of those early days. He suffered from hunger and thirst, lived for a long time without bread, and was content to eat the most vulgar food. More than once, to protect himself against the rigours of the cold, his priestly hands had to take up the axe to cut down the trees of the forest and build himself a hut. He could truly say with : these hands have been used to answer my needs and those of the people around me. Certainly his kind­heartedness was never at fault but his body must have suffered and he developed illnesses that accompanied him until his death, sad and glorious memories like those of a war veteran… He cooperated in the conversion of the Lamys and the Snohomish; he visited the Yougoultas, baptized a great number of pagans everywhere and, finally, he founded a school in Tulalip which today is under the direction of the government. Therefore he has passed through doing good; his work lives on and his name is blessed everywhere.” 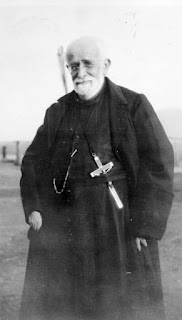 The story of Father Chirouse and other early missionaries to the Northwest area reads like fiction. It is hard for us today to imagine their hardships, courage and faith to persevere for the sake of others.

Posted by mother hildegard at 9:38 AM