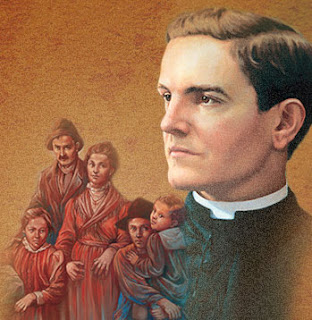 The last couple of years have seen a bit of a boom in American saint making. Before the beatification of Bl Stanley Rother in September 2017, no American-born man had yet risen to the distinction of Blessed in the Catholic Church. But with Father  McGivney's beatification, he will become the fourth American-born male Blessed (or fifth depending on when Archbishop Fulton Sheen’s beatification takes place!).

Our Mother Therese (past Prioress) was born and raised near , so has always had a devotion to FATHER MICHAEL McGIVNEY.

We relate to so many Knights of Columbas in our area, that we all feel we too  have a personal connection to this soon to become blessed priest.

A devoted parish priest of the Archdiocese of Hartford, Father McGivney founded the Knights of Columbus 138 years ago in order to serve the spiritual and material needs of Catholic men and their families.

“Father McGivney was ahead of his time in enhancing the laity's role in the Church and inspiring the laity to put their faith into action in countless ways,” Supreme Knight Carl A. Anderson said. “Today, his spirit continues to shape the extraordinary charitable work of Knights as they continue to serve those on the margins of society as he served widows and orphans in the 1880s.”

“By permission of our Rt. Rev. Bishop, and in accordance with an Act of the Legislature of the State of , we have formed an organization under the name of the Knights of Columbus,” he wrote in April 1882 to a long list of parish priests in . He saw the fledgling Order as addressing a pressing need of the Catholic Church in , and concluded with an earnest request: “that you will exert your influence in the formation of a Council in your parish.”

In May of 2020, following extensive investigations by  medical experts and theologians, Pope Francis confirmed that Mikey Schachle, an unborn child with Down Syndrome, was miraculously cured of fetal hydrops, an uncommon and typically fatal condition, after the intercession of Father McGivney.

The recognition of this miracle led the way to his beatification, which will occur on October 31.

Posted by mother hildegard at 10:34 AM