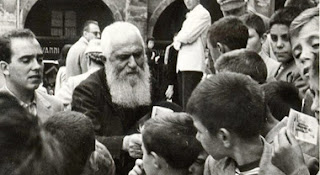 BLESSED OLINTO MARELLA was an Italian Roman Catholic priest who exercised his pastoral service in the Archdiocese of Bologna. The new blessed was a classmate of Pope St. John XXIII in Rome and the pope held him in high esteem and supporting his pastoral initiatives.

He was proclaimed to be Venerable on 27 March 2013 after Pope Francis recognized that he had lived a life of heroic virtue. Pope Francis confirmed a miracle attributed to him on 28 November 2019 and Padre Marella was beatified in on 4 October 2020.

Olinto Giuseppe Marella was born on 14 June 1882 in Pellestrina, one of three children to Luigi Marella and de' Bei. His father died when he was  ten in 1892 and his brother Ugo died in 1902. His other brother was Tullio. His uncle - Archbishop Giuseppe Marella - took care of his education. 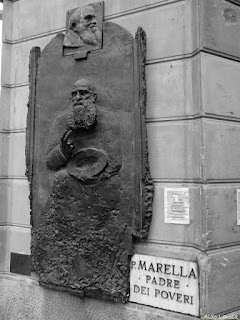 .
Olinto Marella studied in Rome and was a classmate of Angelo Giuseppe Roncalli - the future Pope John XXIII. Cardinal Aristide Cavallari ordained him to the priesthood in 1904 and he was assigned to teach in seminaries in Chioggia. He taught humanities as well as philosophy and theology.

In 1909 his pastoral assignments were suspended after he allowed the excommunicated Romolo Murri (Priest and politician, one of the founders of social Christianity in Italy, he was excommunicated in 1909, which was revoked in 1943.)  into his home. He did not protest the decision and accepted it with a humble heart. Cardinal Giovanni Nasalli Rocca di Corneliano later rehabilitated him in 1925.

He worked with the poor and homeless in , collecting funds for shelters and chapels. Padre Marella would make it his business to sit on a stool on the side of the street and would preach to those who came to him to listen.

Other priests objected to his work as being too evangelical but it did not matter for he had the support of Pope John XXIII who considered Marella to be a "dear friend".

He also knew (St.) Gianna Beretta Molla - (Catholic pediatrician who refused both an abortion and a hysterectomy while pregnant with her fourth child despite knowing that her refusal could result in her own death, which did later occur)  and (Bl) Maria Bolognesi (lay mystic and stigmatic who died in 1980).

Bl. Olinto Marella died on 6 September 1969 with hundreds attending his funeral.  His feast day will be September 6.

Posted by mother hildegard at 10:07 AM