PRAISE WHERE PRAISE IS DUE

On October 8 the Holy Father  in speaking to members of the Women’s Consultation Group of the Pontifical Council for Culture taking part in a webinar praised St. Hildegard of Bingen.

He compared the 12th-century visionary to St. Francis of , the inspiration for his new encyclical, “Fratelli tutti.”

“ Francis of , she composed a harmonious hymn in which she celebrated and praised the Lord of and in creation. Hildegard united scientific knowledge and spirituality. For a thousand years, she has masterfully taught men and women through her writings, her commentaries and her art.” 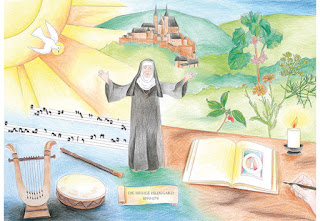 “She broke with the customs of her time, which prevented women from study and access to libraries, and, as abbess, she also demanded this for her sisters. She learned to sing and compose music, which for her was a means of drawing nearer to God. For Hildegard, music was not only an art or science; it was also a liturgy.”

The pope highlighted the central role of women in Christianity. “In the history of salvation, it was a woman who welcomed God’s Word. Women too kept alive the flame of faith in the dark night, awaiting and then proclaiming the Resurrection. Women find deep and joyful fulfillment in precisely these two acts: welcoming and proclaiming.”

“They are the protagonists of a Church that goes forth, listening and caring for the needs of others, capable of fostering true processes of justice and bringing the warmth of a home to the various social environments where they find themselves.”

“Listening, reflection and loving activity: these are the elements of a joy ever renewed and shared with others through feminine insight, the care of creation, the gestation of a more just world, and the creation of a dialogue that respects and values differences.”

This certainly fits with the Holy Father’s intention for the month of October: The Laity’s in the Church, especially  that women may participate more in areas of responsibility in the Church.

Posted by mother hildegard at 12:58 PM