CARLOS ACUTIS,  who was beatified in Oct. 10, is an example of a teen who used the internet to “influence” people to draw closer to God, his mother, Antonia Salzano, said.

“Carlo was able to use social media and especially the internet as an ‘influencer’ for God.”

Carlo  (see Blog  De. 2013) was 15 when he died from leukemia in 2006. He was a computer whiz who taught himself how to program and created a website cataloging the world’s Eucharistic miracles. 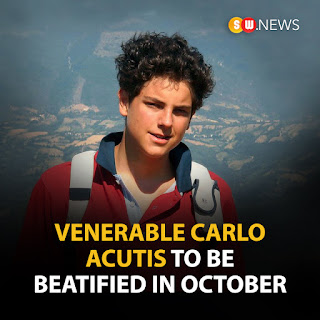 Growing up in the center of , Carlo had a deep love for the Eucharist. He never missed daily Mass and adoration. He also prayed the rosary frequently and went to confession every week.

From age 11, he started helping out teaching catechism to kids at his parish, and he was always helping the poor and homeless in his neighborhood.

“Obviously, being a boy of our times, he experienced what all the young people of his generation have -- so, computers, video games, football, school, friends...” These things might feel common to us,  “he managed to transform it into the extraordinary.”

Like many teens, Carlo liked to play video games. His mom said he could teach young people today about how to properly enjoy them and other technology, without falling prey to the pitfalls of internet and social media use.

“Because he understood that they were potentially very harmful, very dangerous, he wanted to be the master of these means, not a slave,” she said. Her son practiced the virtue of temperance, she explained, so he “imposed on himself a maximum of one hour per week to use these means of communication.”

“So for Carlo, for sure the first point is to teach young people to have temperance, that is, to understand the need to maintain the proper autonomy and the need to be always able to say ‘no, enough,’ to not become a slave.”

“Carlo reminds us of what is most important. The most important thing is to put God in the first place in our life.”   May he be as big an influence on the youth of today as is Bl. Georgio Frassati.

Posted by mother hildegard at 9:50 AM